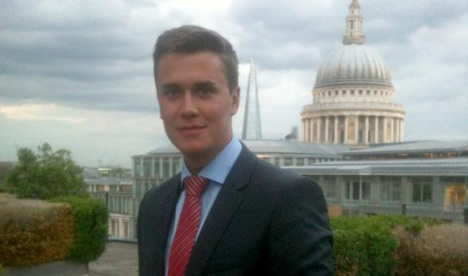 Moritz Erhardt was found collapsed in his east London flat last Thursday, August 15th. He had failed to show up to work at Bank of America Merrill Lynch where he was completing a summer internship.

The parents of the 21-year-old were flying from Germany to London on Wednesday, the Bild newspaper reported. Before leaving his father told the newspaper: “Moritz was our sunshine. His plan was to work hard for a few years and then do something good.”

British media reported that he was just one week away from completing a seven-week graduate programme at the bank’s investment arm and his death has raised serious concerns about working culture in London’s banking industry.

Messages on internet message boards used by the bank’s staff claimed the talented student had worked a 72 hour shift before collapsing. One wrote: “One of the best interns in IBD BAML — 3 all nighters — didn’t turn up, colleagues went to find him.”

The bank said in a statement: “He was popular among his peers and was a highly diligent intern at our company with a promising future.

“Our first thoughts are with his family and we send our condolences to them at this difficult time.”

Police said there were “no suspicious circumstances” around the death.

Erhardt studied economics at the WHU-Otto Beisheim School of Management in Rheinland-Pflaz. He had completed a year abroad in the US and worked for KPMG and Deutsche Bank, the Bild reported.