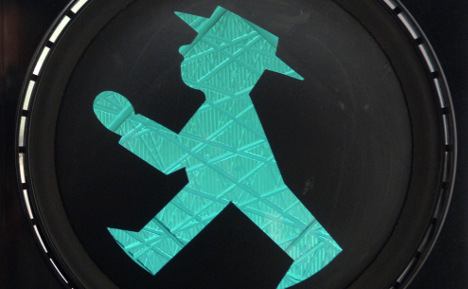 The green man and his red counterpart with their famous hats were once only found in East Germany, but spread to the West when the wall came down. Researchers from Jacobs University in Bremen said that following their study the traffic light figure should be the model for all of Europe.

“Our study shows that the East German Ampelmännchen have not just become iconic symbols of so-called “Ostalgia”, but are also giving their West German counterparts a run for their money when it comes to signal perception,” Claudia Peschke from Jacobs University told Deutsche Welle.

She said that the findings should alert EU decision-makers who are set to homogenize crosswalk lights throughout Europe.

But designer Markus Heckhausen, who owns the copyright to the Ampelmännchen design, told daily newspaper the Bild on Tuesday: “It’s a nice idea, but nobody has asked me as the copyright holder.”

For the Bremen study the research group was presented with familiar traffic icons from West and former East Berlin and measured how long it took the participants to press ‘stop’ or ‘go’ buttons.

They reacted quicker to the Ampelmännchen than any other symbols.

Since the fall of the wall the symbol has become an icon for Berlin placed on T-shirts and souvenirs for tourists.