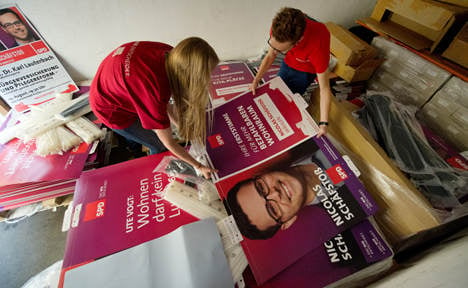 The Social Democrats (SPD) and Greens took a more environmentally-friendly approach to campaigning for the upcoming German election, by opting out of using the classic wooden boards for their candidate posters.

The SPD paid a seven-figure sum for the “Eco-Wave” posters, made by a firm in Sölingen, newspaper the Westdeutsche Allgemeine Zeitung reported on Monday.

And despite being told by the company that they were “particularly waterproof”, the SPD told the paper that they had to replace around 10 percent of their 900,000 posters plastered across the country.

The Greens also opted for eco-friendly posters made by a Berlin-based company. It promised “at least 50 days of durability”, yet the party’s posters are already sliding off walls and lampposts in bad weather.

Politicians from the party are reportedly so disappointed with their choice that they are thinking about reverting back to the traditional, slightly less environmentally friendly, wooden boards.