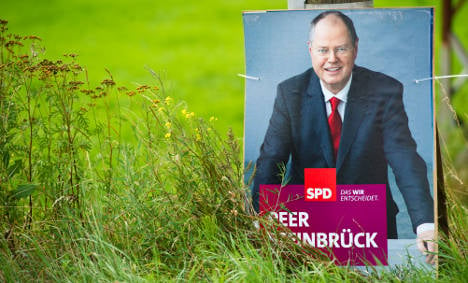 Coming fewer than 40 days before the general election, yet billed as a “Germany festival”, the party has drawn criticism from political opponents who say it is nothing other than a campaign vehicle.

The district mayor, a member of Chancellor Angela Merkel’s conservatives (CDU) had opposed the application for the party, but he was bypassed by SPD city bosses. Carsten Spallek argued that the party had already marked its anniversary in May in Leipzig, where it was founded.

It was there on May 23rd, 1863 that the General German Workers’ Association or ADAV – the predecessor to the SPD – was set up in Leipzig by the pioneer of German socialism, Ferdinand Lassalle.

If it were to function as a political rally – and chancellor candidate Peer Steinbrück is set to make an appearance – it would need to work very well to have much of an effect – the SPD is still trailing Merkel’s CDU significantly.

Figures published on Friday by public broadcaster ZDF suggested the SPD was on 25 percent of the vote, while the CDU’s conservative bloc was on 41 percent.

It is only the continued poor performance of the CDU’s current government coalition partner which is hindering a certain continuation of the pairing – the Free Democrats, FDP, are on the five-percent line, the minimum needed to send MPs to parliament.

This means the current coalition is on a combined 46 percent, while the SPD with its preferred coalition partner the Greens, would achieve 38 percent. On those figures neither grouping would have enough to form a majority government.

But on personal popularity, Merkel remains streets ahead of Steinbrück, with 63 percent saying they would vote for her if the chancellor were to be directly elected. Steinbrück, whose election campaign has failed to catch light, was the favourite of just 29 percent.

And this year election polls could continue much longer than is normally the practice, after ZDF said it would break the convention of publishing the last one ten days before the election, before observing a poll black-out until the vote.

This year ZDF plans to publish the results of a poll three days before the election, saying people were deciding which way to vote later and later, and that the broadcaster did not want to keep its information from the public.

This is likely to benefit the FDP more than any other party, academic Peter Lösche told the Tagesspiegel newspaper. He said people were only likely to be influenced by late opinion polls if they suggested a party was heading to fail to clear the five percent needed to get into parliament.

“There is nothing better that could happen for the FDP than lying at 4.5 percent in the ZDF opinion poll on the Thursday before the election,” he told the paper.