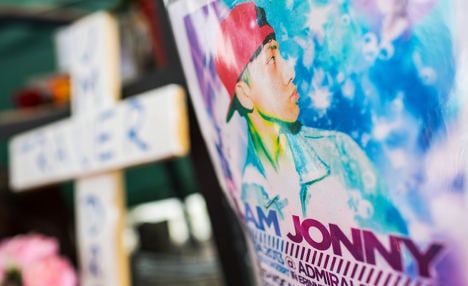 Jonny K. was killed in a night-time assault as he tried to help a friend who was attacked on October 14th, 2012 near Berlin’s Alexanderplatz.

He had been out with friends and died shortly after the attack from a brain haemorrhage.

The judge gave 20-year-old amateur boxer, Onur U. the longest sentence – four-and-a-half years – after finding him guilty of grievous bodily harm resulting in death. He delivered the first punch, the court heard.

The other five men on trial received between two years to eight months each for grievous bodily harm. They punched and stamped on Jonny when he was lying on the floor. All the accused were between 19 and 25-years-old.

Initially the prosecution had called for five-and-a-half years for Onur who fled to Turkey after the attack. Prosecutors said that since no intention to kill could be established, the suspects were not being charged with murder or manslaughter.

Throughout the trial Onur U. maintained that he did not hit Jonny and that he fled Germany after being charged for fear of being pre-judged.

Presiding judge Helmut Schweckendieck said, after the ruling, that Jonny’s death was “a tragedy in which a young man lost his life for no reason.”

He described the attack as a mixture of “idiocy, arrogance, impertinence and aggression”.