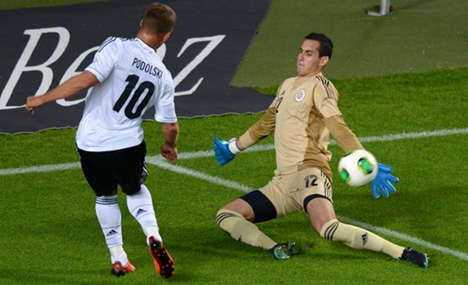 Only an equaliser 15 minutes from time by Bayer Leverkusen’s Lars Bender saved the Germans’ blushes after Paraguay, ranked 49th in the world with Germany second, had raced into a two-goal lead after 15 minutes in Kaiserslautern on Wednesday.

The Germans play Austria in Munich on September 6 and then travel to the Faroe Islands four days later as they look to maintain a five-point lead at the top of Group C in their quest for a berth at the 2014 World Cup in Brazil.

“This match came at a good time – it should serve as a warning. We definitely can’t afford to play like that against Austria,” said Bayern Munich’s Neuer.

After racing into an early lead, Paraguay looked to be heading for a first win over a strong Germany team missing only Bayern pair Bastian Schweinsteiger and Mario Götze.

Goals by Paraguay striker Jose Ariel Nunez and midfielder Wilson Pittoni were cancelled out when Ilkay Gundogan and Thomas Mueller pulled Germany back to 2-2 in a busy opening half-hour.

But the visitors took a deserved lead into the break after winger Miguel Samudio scored their third before Bender’s equaliser.

After his side faced a chorus of whistles at the sold-out 47,500-capacity Fritz-Walter-Stadion, Germany coach Joachim Löw again pointed to defensive flaws with the 4-3 defeat to the USA in Washington DC in June still fresh in the memory.

“We were lacking in both concentration and tactics during the first 10 to 15 minutes,” admitted Löw. “There were some crass mistakes in the first half and we gave our opponents way too much space.”

Germany and Borussia Dortmund centre-back Mats Hummels, who was out of position for both the Nunez and Samudio goals, was furious with his mistakes.

“I don’t really care whether I have to accept blame for the goals or someone else – they just shouldn’t have happened,” fumed the 24-year-old.

Paraguay, quarter-finalists at the 2010 World Cup but currently bottom of South American qualifying for the 2014 finals, had deserved to finish the first half in the lead and captain Roque Santa Cruz, 32, said the draw boosted his young side.

“We don’t have much experience in this team so it’s really nice to get this result in Germany,” said the ex-Manchester City player. “It’s a good confidence booster for us to draw with one of the favourites for the World Cup next year.”

German captain Philipp Lahm said the defensive errors would be erased before they host Austria.

“We only trained twice before this match,” said the Bayern Munich defender. “We’ll have more time to prepare and obviously we don’t want to concede three goals next time.”