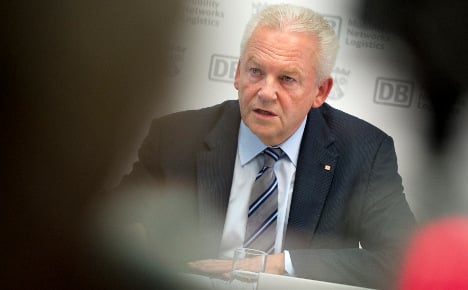 In a crisis which is threatening to engulf other areas of Germany, head of Deutsche Bahn Rüdiger Grube has abandoned his holiday to tackle the embarrassing mess which has left Mainz central station cut off from the rest of the network.

The chaos has been sparked by a lack of signal box operators to guide trains in and out of the station.

On Wednesday Deutsche Bahn confirmed that Grube had personally called some staff to ask if they would mind breaking off their holidays to come back to work and help solve the immediate crisis.

“In the interests of our customers, the company and all our 300,000 staff, he called a handful of colleagues in Mainz and asked them to consider whether they could delay their holidays,” said Bahn spokesman Oliver Schumacher. “But he stressed they should sleep on it.”

This infuriated rail workers’ union EVG. “That workers who urgently need a holiday were personally phoned by the most senior company manager is just incredible,” said union leader Alexander Kirchner.

He said there were some staff at Mainz signalling centre who had not had three days off in a row since December, adding that everyone working there had already built up what he described as a mountain of overtime.

This week it emerged that three signallers who were on holiday could hold the key to the chaos – all the others who were not already scheduled to work were off sick.

And while Mainz was closed, with trains being routed around the central station there, politicians attacked the staffing policies of Deutsche Bahn, which has over the past few years made significant cuts. These were to reduce costs ahead of a mooted sale, which never happened.

The most acute situation is in Mainz, but Deutsche Bahn workers have warned that many other stations around the country could easily follow suit and become in effect inoperable due to a lack of qualified staff.