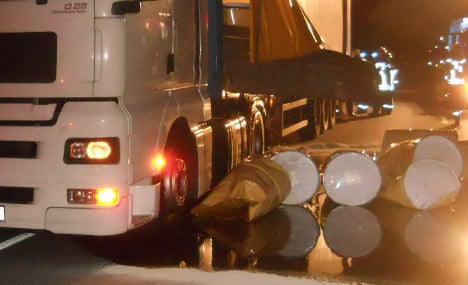 “The road was so sticky we had to close it to traffic completely,” a Mayen police spokesman told The Local.

“But it was all cleared up before the sun came up and there were no reports of insect trouble.

“It was a very international accident. A Romanian driver in a Spanish truck – and who knows, even the bees which made the honey could have been blown over from North Africa.”

The driver was heading towards the A61 motorway shortly before midnight when he was cut up by a car and slammed on the brakes.

The metal barrels of honey in the back of truck fell over and broke through the flimsy side of the truck, smashing as they hit the road and spilling their contents.

Around 2,000 litres of honey was spread all over the road – a danger to commuters and a tempting treat to all sorts of insects.

Firefighters used a digger to dump soil onto the honey to soak it up. They then scooped up the soil and disposed of it.

The road was reopened by around 5.30am – just before the sun came up and insects become active.

Police are appealing for witnesses to give them a buzz, and say they will comb through any potentially useful information.