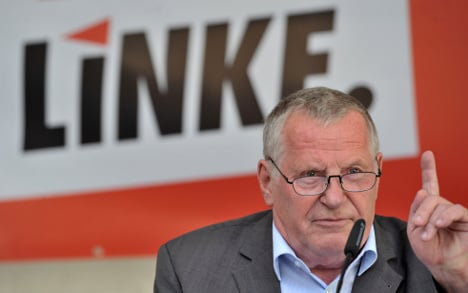 His death coincided with the 52nd anniversary of the start of construction on the Wall.

Bisky was a member of the European Parliament for the far-left Linke party. Its German parliamentary group leader, Gregor Gysi, announced his death “with deep sadness” in a statement.

The cause of death was not immediately released, but he had suffered ill-health for some time.

Bisky led the Party of Democratic Socialism (PDS), the immediate successor to East Germany’s communist party after national reunification, from 1993 to 2000 and again from 2003 to 2007.

After the party merged with a small left-wing outfit from the west to become the Linke, he served as co-chairman with former finance minister Oskar Lafontaine until 2010.

A fierce defender of easterners’ interests as the region was battered by the economic upheaval that followed reunification and the introduction of capitalism, Bisky nevertheless suffered a dent to his reputation when it emerged in 1995 that he had worked as an informant for the Stasi secret police.

Born in Pomerania in today’s Poland, he fled the region with his family after World War II for northern Germany.

He moved to the German Democratic Republic, as the communist state was then called, to pursue university studies and joined the ruling Socialist Unity Party in 1963, two years after the Wall went up.

Bisky went on to become a professor of film and television in Potsdam outside Berlin where he worked until the Wall fell in 1989 and then moved briefly into public television after reunification in 1990.

He took over the leadership of the PDS from fellow moderate Gysi in 1993, and approved a party platform the next year that broke with the hardliners and promised a “leftist democratic alternative” to the conservative government of then chancellor Helmut Kohl.

Ahead of the September 22 general election, the Linke is currently polling at about seven percent.

But its hard-left economic positions and rejection of German membership of NATO have led the main opposition, the Social Democrats, to rule out forming a national governing coalition with the party.