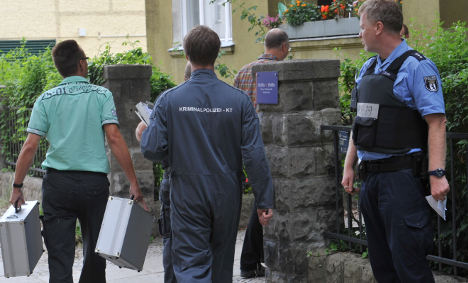 “The suspect let themselves into the office with a key,” a spokesman for the Berlin public prosecutor told The Local.

“There was one gun involved but we don’t yet know what kind it was because it is gone,” he added.

The boys were held over night but released on Tuesday morning because, the prosecutor said, evidence against them was not strong enough to hold them for longer

As witnesses are sought and further evidence gathered, the legal weight of the suspicion against them could increase, he said, and refused to rule out that they could become prime suspects.

The tax advisor, identified only as Ingo W., died after a young man came into his office in a leafy area of west Berlin and fired several shots into his head and chest, according to Berlin newspaper BZ. He died later in hospital.

Police were called to the street in Charlottenburg at around 2.30pm and arrested the 49-year-old’s teenage sons who were in the family home next to the office. The boys, named as Constantin, 16, and Markus, 18, were kept in custody overnight.

Wife of the victim and mother of the boys, Katrin W., was reportedly being treated for shock at home. According to the Bild newspaper, the couple had been experiencing marital problems. It had been her 49th birthday on Sunday, the paper said.

“I heard gun shots, lots of them,” a middle-aged woman neighbour told The Local. “Then the police came.” She said she knew the family, but added: “I really don’t want to talk about that.”

Another neighbour said that she would see the two boys around three times a week and that “they were very nice, always said please and thank you.”

She added that she had never had any reason to think there was any violence in the family. Markus was a keen swimmer and Constantin was learning the cello, she said.

When The Local visited the area today the office was closed.

Berlin newspaper BZ reported that the victim’s three colleagues were in the office when he was shot. Medics tried to resuscitate him for around 40 minutes and took him to hospital once he had been stabilised, but he died shortly afterwards.