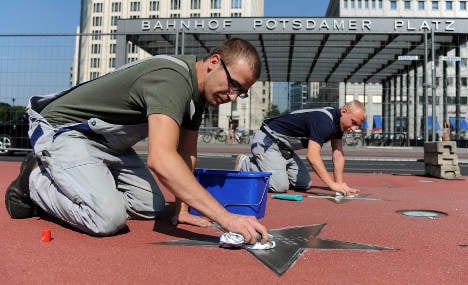 Scruffy, dirty, tatty – not the kind of words usually associated with the glitz and glamour of the silver screen. Yet just three years after it was built, the capital’s Boulevard der Sterne just off central Potsdamer Platz, has passed its prime.

This week authorities said there would be no more golden stars added to the red strip this year, the Berliner Morgenpost reported. The problem stems from the red surfacing strip which frames the plaques honouring VIPs from the world of cinema.

Three years after being laid, the surfacing material has faded in the sun, buckled and cracked under weight of many passing feet – an unglamourous sight which councillors believe no longer does justice to the 81 stars immortalised there.

“The red surfacing is fading,” Carsten Spallek, a councillor responsible for building and construction in Berlin’s Mitte district, said. “And cleaning it has presented us with enormous problems.”

In the face of spiralling maintenance costs, city authorities said they are now suing the company which built the fading boulevard for a six-figure sum. Meanwhile, a new material is being tested which could give the star strip back its former shine.

However, it will be too late for this year’s star-adding ceremony, which has taken place every September since the boulevard was unveiled in 2010.

Ten further stars – including Tom Tyker, director of Perfume and German actor Christoph Waltz (Django Unchained, Inglorious Basterds) – were to be added on September 9, but that has now been postponed.

In the long term the future of Germany’s Walk of Fame, which has already cost over €1.8 million, is less than certain, wrote the Berliner Morgenpost.

Plans to build a tramway along the strip will probably seal its fate, but that is not scheduled until 2020 at the earliest, councillors said.