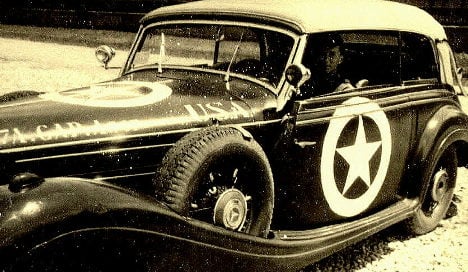 The 1941 Mercedes Benz 540K Cabriolet B, will now be restored in Florida, 68 years after it was captured by US troops, along with its owner, towards the end of World War II.

When the Germans surrendered on May 8th 1945, Colonel Heintges, the commander of the 7th Infantry, took possession of the car as his personal vehicle.

Göring, the head of the German Air Force commissioned the car to be built in 1940. The vehicle was one of the fastest cars in the world at that time. Among its special features are a custom body for a raised back seat and a parade platform.

While being used by the US Army, the car was painted Green with the army star on the hood. Towards the end of the occupation, the car was sold as surplus to a US Army staff sergeant and brought to the United States.

He kept it in Texas for a few years, and then sold it to a North Carolina man, who has kept it in his garage to this day.

In the late 1970s, the new owner sent the car for a partial restoration but difficulties arose and the restoration was never completed.

The Mercedes is now in the hands of a Florida group, High Velocity Classics Inc., who are assembling a team of experts and investors to restore the vehicle.

It will then be sold to a museum or collector.