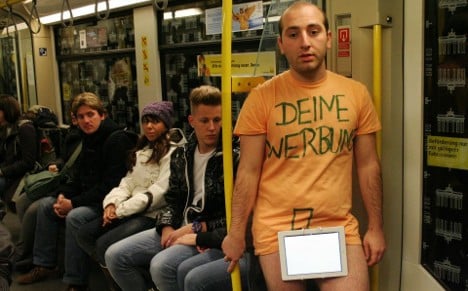 Standing in a crowded U-bahn, trousers around your ankles, with just an iPad shielding your privates from the gaze of curious strangers might not be everyone’s idea of art, but for one Berlin-based performance artist, it’s all in a day’s work.

With his provocative ‘live advertising’ stunt, Mischa Badasyan says he is breaking boundaries – and sometimes local laws – to get people thinking about the prevalence of advertising in public spaces.

Armed only with a blank-screened iPad and a t-shirt declaring “Your advert here” in various languages and an arrow pointing to his genitals, Badasyan is touring European capitals as a ‘walking billboard’ to see how locals react.

But the artist was disappointed to find that few onlookers have so far taken up his offer to use him as a living, breathing poster boy.

“I was surprised to get negative reactions or aggressive feedback,” Badasyan, 25, told The Local. “Some people shouted at me in Berlin, they didn’t like my idea at all.”

The Armenian-born artist, who came to Dresden as a student in 2008, said he wants to “break stereotyped thinking” and challenge social norms with his art. He aims to take his ‘ADbuster’ pants-down project to every European capital.

So far he has hit landmarks and public transport in Berlin, Vienna, Paris, Bratislava, Sofia, Bucharest and Rome – at times with explosive results.

RELATED PHOTO GALLERY: Naked in the train – Badasyan gets mixed reaction from Europeans

“In Italy two guys blamed me for disturbing and reckless behaviour towards children. One guy screamed at me and violently pulled up my trousers,” Badasyan told The Local.

“In France I got in trouble with the security guards at the Pompidou Centre, they tried to call the police but I ran away.”

Badasyan feels the influence of advertising – particularly what he sees as manipulative sexualised adverts – on modern life is often ignored.

“Every step of your life in modern society is influenced by advertisement,” the artist writes on his website. “Each commercial advertisement can be viewed as an invasion of privacy.”

But many who spotted the trouser-less Badasyan in a public place did not immediately catch the point of his message.

“Mostly people asked me why I was doing it and what on earth the iPad was doing there,” he said. “Some people found it funny.”

“Some supported my idea that we have to rethink … billboards with sexual ads in the city,” he added. “Just a small number of people absolutely supported me and liked my campaign.”

Yet in the end, Badasyan said it did not matter what people thought, as long as his work provoked a reaction.

“I always have a message but my performances are open [to interpretation],” he said. “People should have their own idea about what they see in my works.”