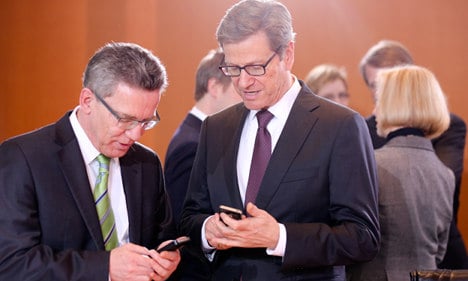 Chancellor candidate Peer Steinbrück of the Social Democratic Party (SPD) told Berlin’s Tagesspiegel newspaper he will ban politicians from having mobile phones in cabinet meetings if he is handed Germany’s reins after the upcoming election.

“It is unthinkable that we would run the risk of being eavesdropped through our mobile phones,” he told the newspaper.

His comments come as Chancellor Angela Merkel called on the US to adopt more stringent data protection laws equivalent to those in the EU. Yet as US intelligence services operate outside of EU law, limiting what they listen to or how remains beyond German control.

Yet Merkel’s government is keen to be seen to be doing something and on Tuesday also announced it had cancelled a 1960s surveillance pact with France after annulling similar accords with the US and Britain.

The 1969 accord was axed “in mutual agreement”, the foreign ministry said, four days after the Washington and London accords were nixed amid the debate on data privacy protection sparked by the snooping scandal.

The so-called administrative agreements dating from the Cold War-era reportedly allowed the former Allies to request surveillance data from Germany’s intelligence services when it related to the safety of their troops stationed in Germany.

Foreign Minister Guido Westerwelle said that, with the last annulment, Germany was “continuing our course in light of the recent debate about privacy protection in a consistent way”.

Steinbrück, meanwhile, is on the attack. “I would like to see more action from [Angela Merkel],” he told the Tagesspiegel.

Merkel is leading in the polls ahead of the national poll scheduled for September 22nd. British daily The Times called Steinbrück’s call for a phone ban a “election ploy to try and erode confidence” in the current chancellor.

While still very popular, Merkel has faced criticism for not doing enough in the wake of the spying scandal.