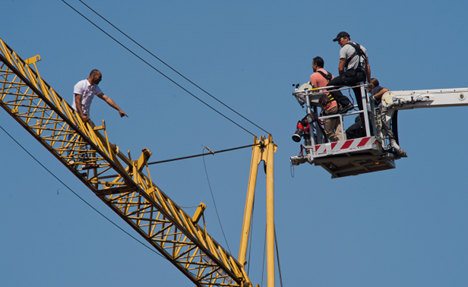 The 31-year-old Syrian man scaled a 30-metre crane on a building site in the Obersendling area of Munich on Monday, and refused to come down. He said that unless the government gave his family asylum, he would jump.

As night closed in, pressure mounted to get the man down. In temperatures of 31C, police were worried the man – who had had nothing to drink all day – would become dehydrated and faint, falling off the crane.

Over 50 police officers, including those from the special operations team, and 30 firemen were on hand to try and get the man down.

Despite the man’s attempts to escape by climbing back and forth from one end of the machine to the other, officers managed to arrest him just before midnight at the top of the crane, using a large cherry picker.

“The man visibly defended himself,” a spokesman from the Munich police said on Tuesday morning. He faces either a prison sentence or a spell in a psychiatric ward, Die Welt daily newspaper reported.

According to a spokeswoman from the ministry of foreign affairs, his wife and child are currently in Cairo, Egypt and applied on Monday for a visa. Only when they arrive in Germany can they apply for asylum – a lengthy process which can often end in rejection.

Bavaria recently changed its asylum laws, causing uproar among immigrants and asylum activists in the state. Regional authorities also said they would be reducing food packages for asylum seekers, as well as financial support.