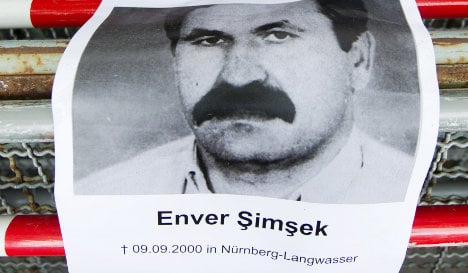 Lawyer Stephan Lucas, representing the children of Enver Simsek told the Munich court of an internal police memo saying that the family had acted “strangely” after the murder, and were not telling detectives everything. But criminal police commissioner Albert Vögeler was forced to admit to the court: “We did not have any concrete facts.”

Yet despite this, the family’s phones and their vehicle were bugged – the same van in which Simsek was shot dead in 2000.

The day’s hearing finally turned the spotlight of the trial onto the authorities who messed up so spectacularly in investigating the string of ten murders between 2000 and 2007 – nine of which were racially motivated.

The Süddeutsche Zeitung said it was a long-awaited day of rehabilitation of the families who, instead of being treated like victims of crime that they were, were mistrusted, spied upon and put under suspicion of covering up the misdeeds of their murdered loved ones.

In Simsek’s case the police suspected a “competitor from the drug world” might have sent a contract killer to murder him – despite a complete lack of evidence that the dead man had any such business, the paper reported.

When that turned out to lead nowhere, detectives figured he must have been betraying his grieving widow with a girlfriend – and questioned her in detail about their suspicions. They ignored her suspicion that he was the victim of neo-Nazis, and instead quizzed her about a non-existent girlfriend, the court heard.

Mehmet Daimagüler, the lawyer for the family of Abdurrahim Özüdogru, who was also killed, told the court of the extensive financial investigations carried out into the family’s matters. Detectives thought the dead man may have been laundering illegally earned money – although his finances were in order.

Lucas summed up the day’s proceedings with regard to the police’s suspicions against the victims and their families: “The witness very clearly said that all these hints were false.”

Official focus on the victims as possible criminals, coupled with institutional racism and intra-agency miscommunication and incompetence, left the National Socialist Underground, as the small gang styled themselves, free to roam the country gunning down a total of eight Turkish men, one Greek, and a German policewoman.

The gang was only discovered when a bank robbery went wrong and two men were cornered in a camper van. One shot the other and then himself, shortly before a huge explosion rocked a house in the town of Zwickau and destroyed the flat the men had shared with Zschäpe who shortly afterwards handed herself in to police.