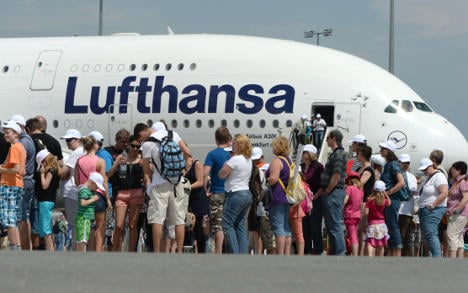 Furthermore, the firm said it was sticking to its targets for a rise in both revenues and operating profit for the whole of the year.

In the period from April to June, Lufthansa’s net profit nose-dived by 42.6 percent to €255 million, missing analysts’ expectations for a figure of about €300 million.

Revenues eased slightly by 0.7 percent to €7.836 billion and operating or underlying profit was down 27.4 percent at €431 million.

Taking the first half of the year, Lufthansa flew in a net loss of €204 million on revenues that had slipped by 0.3 percent to €14.464 billion.

Nevertheless, “adjusted for restructuring costs and one-off effects, the Lufthansa group increased its operating result by €233 million” in the period from January to June, the group insisted.

“Without the one-off effects, the group’s operating profit would have been higher than in the first half of last year,” she said.

And looking ahead to the full year, “the Lufthansa group still anticipates that revenue will be up on last year and that the operating result will be higher” than the €524 million recorded in 2012, the statement said.