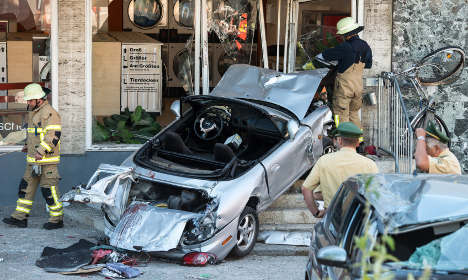 The 46-year-old driver had broken through a road works barrier and weaved his way through Regensburg on Thursday afternoon, causing several accidents and injuring at least one pedestrian, Bavarian police reported on Friday.

On Friday afternoon, they said it was thought the man was suffering a psychiatric illness and had been undergoing voluntary treatment in a psychiatric clinic.

After discussions with his doctors, he had left the hospital on Wednesday evening, but did not return. On Thursday afternoon he started his fatal journey through Regensburg.

The first call to police was to report a 60-year-old pedestrian having been injured by the silver-coloured Mazda convertible. A second call reported that the car had hit and seriously damaged another car, although the two people inside escaped injury.

Police officers followed him in another car, after which the man smashed into the launderette, hitting the young girls who were by the entrance.

The five-year-old girl was so badly injured that she died in hospital shortly afterwards, while her little sister was seriously injured, but is not said to be in danger. Their mother, herself only 27, was also taken to hospital in shock.

The driver was also slightly injured, police said. Tests are being carried out on a blood sample, while he is being held in a psychiatric ward.