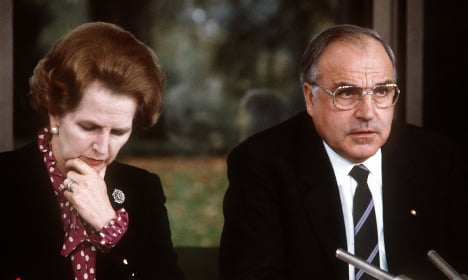 “Chancellor Kohl said… it would be necessary over the coming four years to reduce the number of Turks by 50 percent – but he couldn’t say this publicly,” the record of a conversation he had with then British Prime Minister Margaret Thatcher during a visit she made to Bonn.

“It will not be possible for Germany to assimilate the Turks in their current numbers,” he told her during their meeting, on October 28, 1982.

Only four people were in the room at the time – apart from Kohl and Thatcher, he was accompanied by his advisor Horst Teltschik while her private secretary A.J. Coles kept the now-released notes on the meeting.

The documents have been released by the National Archive of the British government under the 30-years rule which keeps certain classified documents under lock and key for three decades, but then makes them available to the public.

Der Spiegel magazine has seen the record of the Kohl-Thatcher meeting.

Kohl said other migrants were not as “problematic” as the Turks.

“Germany has no problem with the Portuguese, the Italians, even the south-east Asians, because these communities integrate well,” he told Thatcher. “But the Turks come from a very different kind of culture… Germany has integrated 11 million Germans from eastern Europe. But these were Europeans and therefore did not pose a problem.”

He said the Turks living in Germany were often working illegally, and forced their children into arranged marriages. Half had to go, he said, while those who remained would have to learn German so they could integrate.

Kohl had already taken aim at the Anatolian Turks in Germany, the largest group of immigrants, during the election campaign, saying they were neither capable nor willing to integrate.

And during his first government statement after being elected, he said that “Integration is only possible when the number of foreigners living with us does not rise any further.”

But he did not breathe a word publicly about ideas about sending hundreds of thousands of people away.

Even if he had, Der Spiegel suggests, he would not have faced the kind of outraged opposition that would greet such a proposal today.

“At the time the social consensus in the Federal Republic was that the Turks were guest workers and had to go home,” historian and author Ulrich Herbert told the magazine.

And Kohl’s government did try to tempt Turks to leave Germany, monetising the social security contributions those who had been working here to offer them more than 10,000 Deutschmarks if they would leave.

Only around 100,000 people took up the offer, and they were quickly replaced by others escaping war and coups, said Herbert.

In the end, just as many Turkish people living in Germany learned the language and integrated, so Germans and even Kohl become more accepting. In 1993, Der Spiegel noted, he pushed his party into passing a law enabling Turks to become naturalized Germans. And in 2000 he attended the wedding of his son Peter to a Turkish woman.