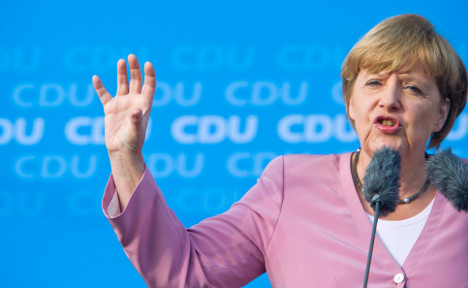 Back in April, a different poll by the Forsa institute had also handed Merkel’s current centre-right constellation the joint score of 47 percent for the first time since the end of 2009, shortly after it took power in Merkel’s second term.

The latest survey, by Infratest dimap conducted between July 29th and 31st among 1,503 people, showed the conservatives steady on 42 percent and the FDP gaining a point to score the all-important five percent, the minimum for entering parliament.

Polls ahead of the September 22 elections have often shown support for the Free Democrats fluctuating and often dropping below the hurdle which would force Merkel to seek a new coalition partner.

In the poll the main opposition Social Democrats together with the ecologist Greens and far-left Linke party had 46 percent of votes, although the SPD has ruled out forming a coalition with the Linke whose origins included remnants of ex-East Germany’s ruling communists.

Despite uproar over revelations of sweeping US online surveillance and reports of German cooperation, Merkel appears to retain the popularity she has notched up through her handling of the eurozone debt crisis.

With 67 percent of those asked in another poll for ARD saying they were satisfied with the job she was doing, Merkel remains a firm fixture at the head of Germany’s ranking of its most popular politicians.

The SPD’s challenger for the chancellorship, Peer Steinbrück, scored 35 percent.