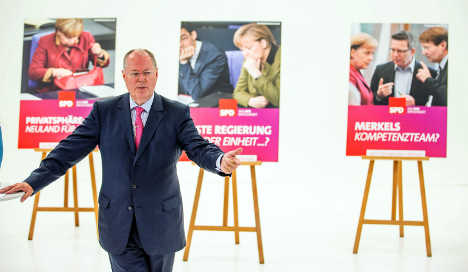 One of the posters shows Merkel rooting through a red handbag. It’s accompanied by the slogan “The private sphere: Also virgin territory?” – a reference to Merkel’s infamous, multi-meme-generating comment that the internet was still “virgin territory”.

It is also likely a dig at the government for failing to react to allegations of the NSA spying on German citizens.

Another shows Merkel slumped over a table asleep with her chin in her hands beside her junior coalition partner, Philip Rösler, who gazing blankly into the distance, resembles a brooding schoolboy. “Best government since re-unification?” it asks.

RELATED PHOTO GALLERY: Click through to a gallery of the posters

While Merkel does feature heavily in the campaign, the posters are not all focussed on negative campaigning.

One features a pair of cleaners.”WE are for a minimum wage,” it says, referring to the SPD’s pledge to introduce a nationwide minimum wage of €8.50 an hour.

“WE are for more childcare places,” another promises, as opposed – it implies – to Merkel’s policy of providing financial compensation to families who look after their children at home rather than sending them to state-subsidized daycare. A third pictures a family in an apartment with the slogan “WE are for affordable rents.”

The SPD has so far failed to make gains on Merkel’s Christian Democrats and its Bavarian sister party, the CSU. A poll published last week predicted a crushing defeat for the party in the Bavarian state elections, which take place just a week before national elections.

Yet the party’s chancellor candidate Peer Steinbrück has vowed to fight on. “We want a change of government on 22nd September because we want movement instead of a stalemate,” he said at an event to mark the launch of the poster campaign.