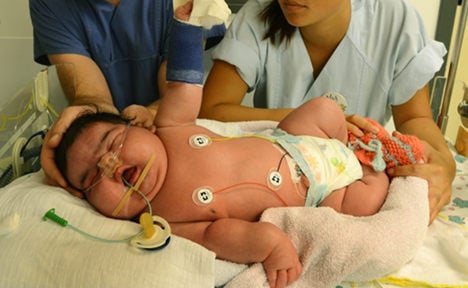 Parents welcomed baby Jasleen on Thursday in the Leipzig university hospital. With a length of 57.7 centimetres and weight of 6.11 kilos, she is the heaviest baby ever to be born in Germany – newborn girls normally come in at 3.2 kilos and are around 49 centimetres long.

Head of obstetrics Holger Stepan had, he said, prepped the delivery team for potential complications but the birth went well and even a caesarian section was not necessary, with the mother delivering vaginally.

The mother was not known to the hospital prior to going into labour, and was found after initial tests to have developed gestational diabetes during pregnancy. Left undiagnosed, this caused Jasleen’s larger-than normal size.

She remains in the newborn ward, where doctors are watching her insulin levels carefully. It is not clear how much longer she will have to say, a spokeswoman said on Tuesday.

Before Jasleen arrived, the biggest baby born in Germany was Jihad, who was also delivered naturally in Berlin in November 2011. He weighed six kilos.

Babies over four kilos – about one in ten in Germany – are generally considered to be overweight and run higher risks of diabetes and obesity later in life.