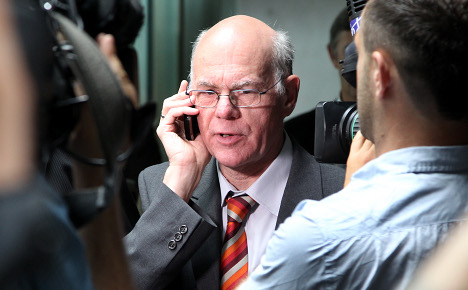 Lammert is one of many German politicians to fall foul of plagiarism charges in the past few years. Unlike the former education minister and former defence minister before him, both of whom were found guilty of copying much of their work without referencing its source, the conservative politician claims the piece is all his.

“I wrote my doctorate to the best of my knowledge and beliefs,” he told the Zeit newspaper on Tuesday. He is, he said, “convinced of its scholarly quality.” Lammert presides over German parliamentary sessions.

An anonymous blogger operating under the name Robert Schmidt claims to have found instances of plagiarism on 42 pages of the president’s doctorate.

A website which has been set up to detail alleged instances of plagiarism on Tuesday stated: “He has clearly not read a considerable part of the cited literature; which is particularly evident in that there are numerous characteristic errors from the secondary literature.”

Lammert earned his PhD in 1975 after completing his doctorate at the University of Bochum in North Rhine-Westphalia. Fittingly, the subject of his thesis was the Christian Democratic Union – the party he is now a member of – in the Ruhr region.