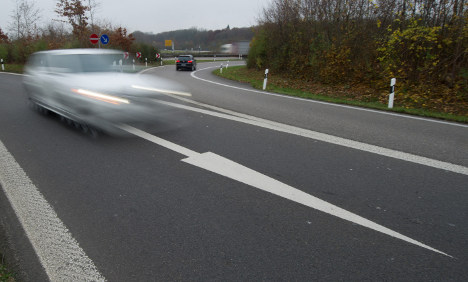 The 26-year-old, who was later found to have been drinking, is thought to have been speeding on a bridge over another main road in a forest ravine near Neuhäusel in Rhineland-Palitinate, western Germany, on Saturday night.

When his car hit the bridge barrier at speed, the man flew 75 metres over the treetops below, before soaring down to land upside down on the road 25 metres below the bridge above.

By the time police arrived on the scene, they said on Sunday, the driver was already out of his car and standing beside it on the side of the lower road leading to Koblenz. Police took a blood test and the man was taken to hospital.

The police, who said they believe the vehicle had been travelling much too fast, have confiscated the man’s driving license. Two other cars were damaged in the incident by rubble flying from the bridge and the lower B49 road to Koblenz was closed until Sunday morning to be cleared.