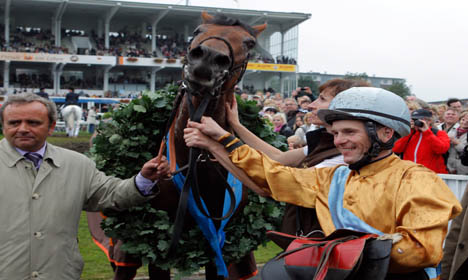 Novellist won the King George VI and Elizabeth Diamond Stakes at Ascot on Saturday. The four-year old finished five lengths clear of the field setting a new course record along the way.

“I used to come to Ascot to watch the King George as a kid on my holidays, now I’m here winning it,” Wöhler (pictured above left) told the BBC.

He added; “One of our strengths is we have horses who mature later and when stepped up in distance. I was confident as I knew he had improved since his last race but I didn’t expect him to win by five lengths.”

Novellist took the lead entering the straight and never looked back to claim the estimated £1,000,000 (€1.15m) prize.

Wöhler said that his winning horse would be targeting the prestigious Prix de l’Arc de Triomphe on which takes place on October 6th.

“The main race would be the Arc after this, and he will have a prep race in advance, either in the Prix Foy or more likely the Grosser Preis von Baden,” said the trainer.

Saturday’s victory at Ascot was Novellist’s eighth in 10 ten starts.