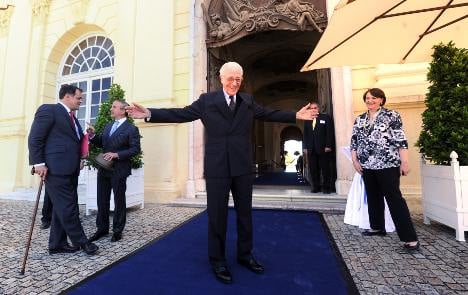 You might be forgiven for thinking Germany was not a home of royalty, but Duke Franz Herzog von Bayern is about as close as you can get. While German law doesn’t recognise royal titles, they can form part of a surname – hence Herzog, German for Duke.

Born a prince of sorts, Franz is the elder brother of Prince Max of Bavaria and inherited the title of Duke as head of the Wittelsbach family – once rulers of the Kingdom of Bavaria – when his father died in 1996.

The Duke’s branch of the royal family lost the throne after the Catholic James II was deposed by William of Orange in England’s Glorious Revolution. James’s elder son, also a Catholic, was passed over for the succession in favour of his daughters, Mary II and Queen Anne.

But Duke Franz, who celebrated his 80th birthday extravagantly this week, usually avoids the subject of the British royals altogether.

RELATED PHOTO GALLERY: Check out who turned up at Duke Franz’s party

Although he adopts the formal address His Royal Highness, “he is very happy and satisfied with being the Duke of Bavaria,” Baron Marcus Bechtolsheim, the president of the administration of the Duke of Bavaria told the British Telegraph newspaper back in 2008.

The octegenarian aristocrat was born in Munich in 1933 to Duke Albrecht of Bavaria and his wife the Croatian Countess Maria Draskovich as Franz Bonaventura Adalbert Maria Prinz von Bayern.

His parents disapproved of the Nazi regime and left Germany in 1939 for the relative safety of Hungary. They lived in Budapest until Hitler invaded in 1944 and had the family arrested – along with 11-year-old Franz, forcing them to spend the rest of the war in concentration camps – until they were liberated by US troops in 1945.

After WW2, the Duke finished school and later went to read economics and business at Munich and Zurich Universities. He developed a life-long love of modern art and has an extensive collection. The aristocrat never married and lives alone in the large Nymphenburg palace.

Around 2,500 of Bavaria’s richest, most powerful and influential guests on hand to pay tribute to the Duke at his birthday party at Schleißheim palace outside Munich on Monday, an event surpassed only in pomp by the royal birth taking place in Britain.