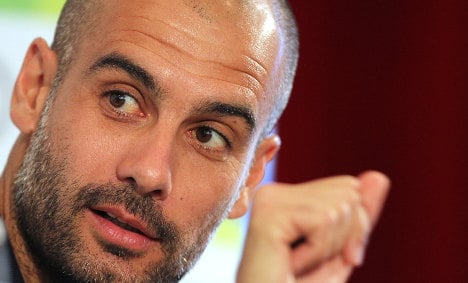 After Guardiola won 14 titles between 2008 and 2012 at Barcelona, the pre-season run-out has added spice given recent events which have strained relations between the two European powerhouses.

Guardiola took charge of Bayern last month amid great fanfare, after the Bavarians lured the 42-year-old to Munich following his year’s sabbatical in New York.

But Guardiola stirred up bad blood with his former bosses earlier this month when he accused the Barcelona board of trying to “damage” him.

Guardiola lashed out in a press conference, making allegations against the board, which were later refuted, that he had snubbed Vilanova while he was being treated for cancer in New York.

“I will never forget that they used Tito’s illness to cause me damage, because it’s a lie that I never saw him in New York,” he said.

With relations strained off the field, there is plenty of spice on it, although both teams are likely to name weakened teams.

Bayern’s Germany stars Bastian Schweinsteiger and Mario Götze are both recovering from injury, while neither team is expected to have their Confederations Cup stars in action.

Both Barcelona’s new Brazil star Neymar and Spain’s Carles Puyol, who is working his way back to fitness after knee surgery in March, are expected to sit it out.

Senior stars Javier Mascherano, Adriano Correia, Alex Song and Alexis Sanchez are likely to feature among a host of reserves, while Argentinian superstar Lionel Messi is set to play some part.

Barcelona have something to prove against Bayern having been humbled 7-0 on aggregate in last season’s Champions League finals when the Germans backed up a 4-0 win in Munich with a 3-0 rout at the Camp Nou.

Having already chalked up wins over Bundesliga opposition Hamburg and Borussia Mönchengladbach in a pre-season tournament over the weekend, the Barcelona friendly is a big test for Guardiola’s new-look Bayern.

He has introduced a 4-1-4-1 system, from the 4-2-3-1 formation which won last season’s treble, and switched Germany captain Philipp Lahm from right-back into midfield with France winger Franck Ribery up front.