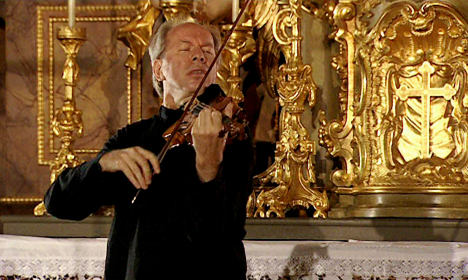 “I’m very concerned that more and more freedoms that we take for granted – such the freedom of speech and artistic freedom – are being curtailed in Russia,” Kremer told the German daily Die Welt in a recent interview.

“It’s like it was in the Soviet Union, but of course with different methods and not as draconian as in Stalin’s time,” Kremer said. “Jail sentences such as the two years for Pussy Riot are unjust and disproportionate,” he said.

Kremer refused to name any names, but said he could not understand the position of such artists.

“I couldn’t and wouldn’t do what such people do,” he said. “They call it patriotism. But for me, it’s more like opportunism and its only aim is to look after their own interests,” Kremer said.

“As an artist, it’s not only my right, but also my duty to show my true colours and draw attention to such problems.”

He said he had great respect for former artists such as cellists Pablo Casals and Mstislav Rostropovich, and violinist Yehudi Menuhin who were not afraid to “take a stance and fight for freedom.”

The concert will be held in the chamber music auditorium of Berlin’s Philharmonic Hall.