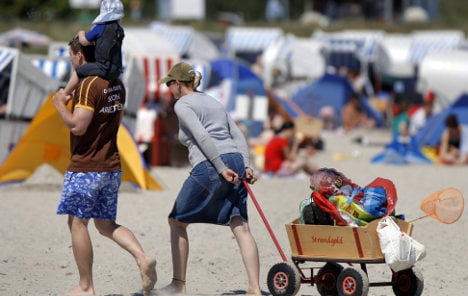 Although Germans are generally considered to be good and frequent travellers, it seems many return to the same place for their holiday every summer, year, after year, after year – and even stay in the same accommodation.

On arrival, the family may be hungry and go in search of food. But here too, habit and caution is likely to rule over any temptation to experiment with a taste of something exotic.

The recent study by market researchers GfK Marktforschung showed 60 percent of German tourists stick to familiar food and drink which they knew agreed with them when abroad.

After eating, the family will probably have a good sit down and plan the rest of their trip in meticulous detail. One in seven Germans said they would feel uncomfortable if they weren’t sure what was going to happen the next day while on holiday.

For many, this schedule will have to timetable in some work-time for the adults – with just under a third of German employees telling a separate recent study that they work at least one to three hours every day while on holiday.

A depressing 14 percent said they do as much work when on holiday as they do in the office – which either means they have really dull holidays or great jobs.

But experts say our stereotypical German family should shake it up and try to let their hair down – not just on holiday, but also during the rest of the year. If they don’t, they could run the risk of burnout, the WAZ regional newspaper group wrote on Monday.

At the very least, everyone should turn off their computers and mobiles while they’re away, “or risk not being able to relax in the time allocated for a rest,” Mathias Berger from the German Society for Psychiatry, Psychotherapy, Psychosomatics and Neurology told WAZ.