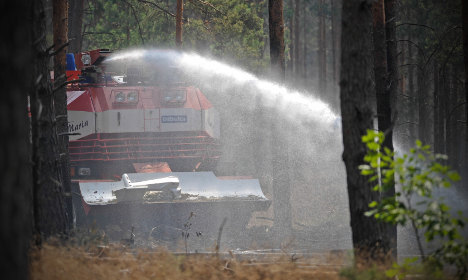 Two hundred fire fighters, a tank and a helicopter were called in to fight the massive fire, which after it broke out on Saturday soon swallowed up 17 hectares of dry Brandenburg forest, wrote Die Welt newspaper on Monday.

Forty-two families living nearby in the Teupitz/Wünsdorf area of southern Brandenburg were evacuated as ammunition stored on the former military ground repeatedly blew parts of the forest sky-high.

“The operation is complicated and because of the ammunition, quite dangerous,” a spokesman from the Brandenburg fire service told the paper on Monday morning, adding that they still had a serious battle on their hands.

The repeated explosions have prevented fire fighters from driving onto the former army base and limited them to launching water into the flames from a distance. On Monday morning there was still no sign of an all-clear for the evacuated families, the spokesman said.

“We’re expecting temperatures of over 30C [on Monday]. That’s bad for us. Then it’ll carry on burning all over the place,” said the spokesman.

Clouds of smoke from the 17-hectare blaze created visibility problems for drivers on the A13 motorway between Berlin and Dresden on Sunday, warned the paper.

No one yet has an idea of how the fire started, but ordnance buried in Brandenburg’s former military sites have been known to go off of their own accord in extreme temperatures in the past.