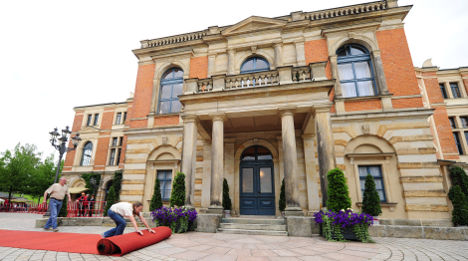 The curtain goes up on the festival’s 102nd edition on Thursday with a revival of a production of “The Flying Dutchman” by German director Jan Philipp Gloger.

But the main attraction this year – and seen as the highlight of the worldwide Wagner 200 celebrations – is a brand new production of the composer’s huge four-opera “Ring” cycle by German “bad boy” director Frank Castorf.

Following is a list of the operas being performed on Wagner’s fabled “Green Hill” this year between July 25th and August 28th.

“The Flying Dutchman” in the first revival since its premiere last year of Jan Philipp Gloger’s disappointingly anodyne reading, with South Korean baritone Samuel Youn in the title role and and German soprano Ricarda Merbeth as Senta. Regarded as Wagner’s first “mature” opera, the “Dutchman” was first performed in Dresden in 1843, but not staged in Bayreuth until 1901.

Bayreuth’s unofficial general music director, German maestro Christian Thielemann, is in the pit. For the first time, the opening performance will be broadcast live into selected cinemas.

“The Ring of the Nibelung” in the feverishly anticipated new staging by iconoclastic German theatre director, Frank Castorf. Brought in at the last minute for the Bicentenary Ring after negotiations with German filmmaker Wim Wenders ran aground, the 62-year-old Castorf is a relative novice to opera.

And his anarchic, punkish aesthetics are certain to enrage the festival’s ultra-conservative audiences. The “Ring” comprises four operas, “Rhinegold”, “The Valkyrie”, “Siegfried” and “Twilight of the Gods” and takes 16 hours to perform. It was first staged in its entirety at the first Bayreuth Festival in 1876. Castorf’s production is the 14th complete staging. It is conducted by Russian rising star and Bayreuth debutant Kirill Petrenko.

“Tannhäuser” in the universally vilified reading by German director Sebastian Baumgarten, which sets Wagner’s tale of a minstrel-knight in a bio-gas plant. The production, first unveiled in 2011, is so unpopular with critics and audiences alike that the festival management has decided to withdraw it early at the end of its run this year. Completed in 1845, “Tannhäuser” was first performed in Bayreuth in 1891. Baumgarten’s is the eighth production on the Green Hill. Conductor is German Axel Kober, making his Bayreuth debut. German tenor Torsten Kerl takes the title role.

“Lohengrin” in a revival of the striking, highly intellectual staging by German director Hans Neuenfels now entering its fourth year. Composed between 1846 and 1848, “Lohengrin” received its world premiere in Weimar in 1850 under the baton of Franz Liszt. It was first staged in Bayreuth in 1894 and Neuenfels’ is the ninth production here. German tenor Klaus Florian Vogt takes the title role for the third year running, with his compatriot Annette Dasch singing Elsa. Latvian Andris Nelsons, one of today’s hottest young conductors, is in the pit.

“Wagner for Kids: Tristan and Isolde”. The Wagner for Kids project, masterminded by Katharina Wagner, has proven a runaway success since it was first launched in 2009. This year, Wagner’s mediaeval love epic has been specially adapted for six-to-10 year-olds and trimmed from five hours to just 70 minutes.