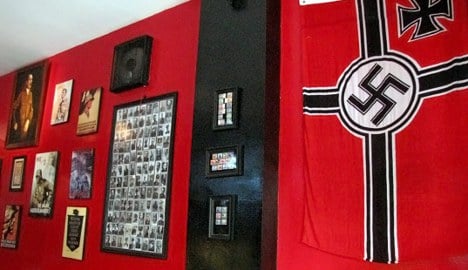 The SoldatenKaffee (“The Soldiers’ Cafe”) opened its doors in the western Javanese city of Bandung in 2011, named after the popular hangout for soldiers in Germany and occupied Paris during World War II.

Eerier than the gas mask canisters and battle flags bearing swastikas is the more than two years’ silence that has followed the café’s grand launch.

When the café opened no one voiced offence at the waiters and guests dressed as Nazi soldiers — the Holocaust is weak on the radar in Indonesia, home to the world’s biggest Muslim population, where the Jewish community numbers a mere 20 people.

But a recent report about SoldatenKaffee in the English-language Jakarta Globe newspaper triggered angry responses online and prompted Bandung deputy mayor Ayi Vivananda to summon the owner for a meeting.

“We need to ask him first in detail what his real intentions are. But what is clear is that Bandung city will not allow anyone here inciting racial hatred,” he said on Thursday.

The café’s creator and owner, Henry Mulyana, said he did not intend to bring back memories of the Holocaust but was not surprised to be branded a “bad guy”.

“I don’t idolize Hitler, I simply adore the soldiers’ paraphernalia,” Mulyana, a Christian who likes playing with air rifles, told AFP at the café on Tuesday.

His collection is on display for diners and includes a water canteen, bayonet, goggles and a lantern, most of them bought online.

“The ones with swastikas on them are worth more,” he said.

The restaurant had only ever received positive press before the recent exposure in English-language media and receives a regular stream of customers.

“We’re living in Indonesia and Indonesians weren’t tortured in the Holocaust, so we don’t really care,” said mining company employee Arya Setya, eating a plate of spaghetti at the cafe with his girlfriend.

But now that news of the cafe’s existence has reached a wider audience, it has sparked outrage among Jewish communities in other parts of the world.

“The Simon Wiesenthal Center is reaching out to senior Indonesian diplomats to express on behalf of our 400,000 members and victims of the Nazi Holocaust our outrage and disgust,” Rabbi Abraham Cooper, from the Los Angeles-based Jewish human rights group, told AFP by email.

“We expect that all appropriate measures will be taken to close down this business celebrating a genocidal ideology that at its core denigrates people of colour and all non-Aryans,” he wrote.

Under Indonesian law, anyone who deliberately shows hatred towards others based on race or ethnicity can be jailed for up to five years.

But such vilification usually goes unchecked, with hardline Muslim groups carrying out violent attacks on religious minorities with near impunity in recent years.

Mulyana said that his café has also attracted Western guests, including Germans, with one photographed on its Facebook page wearing a red swastika T-shirt along with several Indonesians in the same clothes.

He revealed he plans to set up an even bigger café on the resort island of Bali, which attracts throngs of foreign tourists each year.

“I’ll certainly display Hitler’s image, as well as Winston Churchill’s, and paraphernalia from American and Japanese soldiers from World War II,” he said.

His café could not contrast more deeply with attitudes in Europe, where several countries have criminalized the promotion of Nazi ideology and the denial of the Holocaust.

While Mulyana does not deny the Holocaust happened, he said making the tragedy taboo was hypocritical.

“If we want to speak up about humanity, why don’t they stop wars in this world now, like in Afghanistan? War always claims so many lives,” he said.

However, when contacted by AFP on Saturday Mulyana said he had decided to close down the café temporarily, refusing to give further details.

Indonesia, where 90 percent of the population of 240 million identify themselves as Muslim, does not recognise Judaism among its six official religions.

The country has no diplomatic relations with Israel and vocally advocates for the state of Palestine, although it has quietly engaged in economic and military ties.

Today just one synagogue exists in the country, in the city of Manado. A century-old synagogue in the city of Surabaya was shut down by extremists protesting against the 2008-9 war in Gaza.

Other Indonesians in Manado are believed to have Jewish roots, some hiding their heritage for safety fears.

A lack of sensitivity towards the Holocaust has also been shown in other parts of Asia.

Thailand’s prestigious Chulalongkorn University was forced to apologise on Monday after its students created a mural depicting Hitler among comic book superheroes during graduation celebrations.

And in 2006, an Indian restaurateur outraged the country’s small Jewish community by opening “Hitler’s Cross”. He was forced to change the name days later.

Historian Asvi Warman Adam from the Indonesian Institute of Sciences blames Indonesia’s education system and schools for a lack of awareness about the Holocaust and world wars.

“We don’t hear a lot of criticism against the Nazis and fascism in Indonesia,” Adam said.

“Hitler’s book ‘Mein Kampf’ is banned in many countries, but it’s freely distributed here. It’s translated into Indonesian and is quite often sold out,” he said.

He said the school curriculum was focused on national history and trying to legitimise Indonesia’s 32-year Suharto dictatorship, which saw the slaughter of at least 500,000 communists, Chinese and alleged sympathisers.

Islamic hardliners, who are the most vocal when it comes to blasphemy against Islam, are unlikely to make any noise about the cafe, Adam said.

“But if a Jewish-themed cafe opened, they would most likely stage a protest,” he said.