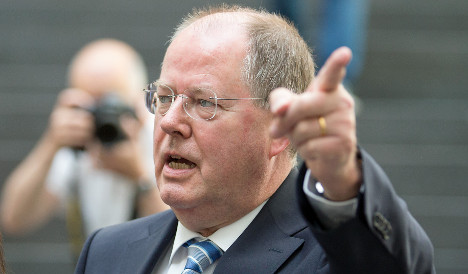 There is widespread disquiet over claims, reported by news weekly Der Spiegel, that the US National Security Agency (NSA) has hoovered up German emails, online chats and phone calls and shared some of it with the country’s intelligence services.

The question dividing analysts is whether the public’s anger could blow back on Merkel, crack the armour of the consistently popular chancellor and damage the seemingly untouchable poll lead of her conservative Christian Democratic Union (CDU).

If more damaging information came to light before the September 22 vote, “this could come to the boil and become a central campaign topic,” said political scientist Hajo Funke of Berlin’s Free University. “The debate is only just beginning.”

Merkel’s struggling rival from the Social Democratic Party (SPD), Peer Steinbrück, has come out swinging, charging that Merkel broke her oath of office pledge to protect the German people from harm. He has called for a parliamentary inquiry.

Snooping on a dizzying scale

In a newspaper commentary he described the scale of reported US snooping as “dizzying” and blamed Merkel — either because she was aware of it and complicit, or because she was ignorant and therefore negligent.

Steinbrück also poured scorn on what he called Merkel’s vague comments on the scandal and her claim to have only learned from media reports of what he called the “million-fold breach of the basic rights” of German citizens.

Germans are particularly sensitive to violations of data privacy, often recalling the role of secret police surveillance under the Nazis and in communist East Germany.

Merkel has approached the thorny surveillance issue with characteristic caution. During a June visit by US President Barack Obama, she spoke of the need to find the right balance between security and freedom.

She was more terse when reports broke that the United States had allegedly also bugged EU diplomatic missions. Spying on allies was “unacceptable”, she told Washington. “We are not in the Cold War anymore,” she added.

However, she has also stressed that Snowden’s claims had not yet been confirmed, and that the NSA had helped foil several terrorist plots in Germany — the country where, as Washington has reminded Berlin, the core September 11 plotters lived.

Interior Minister Hans-Peter Friedrich, a strong voice on law-and-order issues, made the same point after a visit to Washington last week, also complaining about “anti-Americanism” in Germany’s NSA debate.

German protests ‘like a mouse tapping on a table’

He described Friedrich’s US trip as that of “a German mouse tapped softly against the table — only because in Germany it’s election time”.

Merkel, in an interview on Sunday, called for EU-wide and international data protection rules and called on Google and Facebook to “tell us to whom they are giving the data”.

While the SPD and their preferred allies the Greens hope to gain traction with the issue, many political observers don’t see much chance it will help them chip away at Merkel’s lead.

“The opposition is trying to score points, but I would say the interest of citizens in politics is diminishing right now,” said Volker Kronenberg of Bonn University.

“They are heading into summer holidays and there are other topics that interest Germans more: social justice, taxes, the euro crisis.”

A weekend poll by public broadcaster ZDF showed that 79 percent of Germans believe their government knew about the sweeping US surveillance activities.

But the same survey also affirmed a comfortable lead for Merkel’s ruling coalition over the combined forces of the SPD and Greens — and found that Merkel would be the preferred chancellor for 62 percent of respondents.

The poll gave the CDU 41 percent and its allies the Free Democrats five percent — putting the coalition ahead of their rivals, with the SPD scoring 26 percent and the Greens 13 percent.

The far-left Linke party, considered unlikely to join any governing coalition, scored seven percent, while other parties were below the five-percent threshold, including the Internet-freedom Pirates and anti-euro AfD party.

Pollster Manfred Güllner, head of the Forsa Institute, said the SPD and Greens were unlikely to profit from the surveillance scandal for another reason — because some of the blame could fall into their laps.

“If it was known, then everyone knew, not just the government,” Güllner said. “The SPD was in government until 2009. The SPD-Greens government tightened the laws after 9/11.”