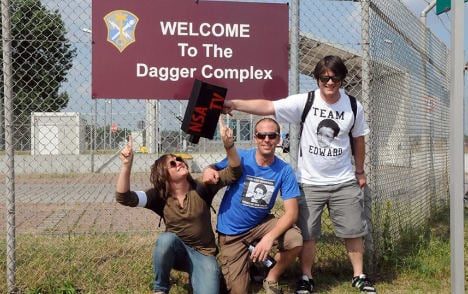 Daniel Bangert, 28, told The Local he had joked about US spies reading what he had written – and had even told his friends he was waiting for a knock on the door – when it actually came.

“I was still very sleepy when the phone rang – it was 7.17 in the morning – and a police officer started asking questions about what I was planning,” he said.

“Then the doorbell rang and I saw out the window that a police van was parked outside. The officer on the phone said I should open the door to the others.”

He put on a “Team Edward” T-shirt with a picture of NSA whistle-blower Edward Snowden, and answered scores of questions about his plans.

Bangert, a veteran of the Blockupy protests in Frankfurt, had set up a group calling itself “NSA spy protection league” (NSA Spion Schutzbund), as if the US spies were an endangered species of birds.

He wanted, he said, to take a walk with some friends to “observe them in their natural habitat” – the Dagger Complex in Griesheim near Darmstadt. This is one base where the NSA (US National Security Agency) is said to operate from. The authority stands accused of monitoring much of Germany’s internet traffic.

The uniformed police seemed satisfied with his answers about the expected number of people on the walk – 32 had shown an interest, Bangert told The Local. But despite there being no specific agenda, and no plans for a rally or speeches, he was told he had to register the event.

“I asked them why, but they could not really explain it to me. They couldn’t help me understand what the difference was between going for a walk and meeting up to play football – which you don’t have to register,” he said.

A few hours later, his phone rang again, and one of the police officers who had been at his house that morning, told him the state security wanted to talk with him.

“She said I should call them, that it was important that I did. So I did, and they asked me again about the Facebook entry, and how many people were expected and so on. Then they asked if I would go to see them or if they could come to see me for a personal conversation.”

He said a state security agent arrived with a local police officer, and asked him a load of questions about his political activities and his opinions, and whether he had any connection to activists willing to use violence. They suggested his Facebook entry could be interpreted in different ways, but he said he was really just organizing a walk.

“Then they told me I should not put the meeting on the internet, that I should not write about it,” he added.

They seemed to be concerned that the walk could get out of control if lots of people showed up – like the Facebook parties which are hijacked by hoodlums. “But I was not offering anything for free like at the parties,” he said.

“And in any case, all there is, is a fence, with nothing behind it – everything is underground. No-one is interested.”

In the end around 80 people showed up on Saturday to take a walk, have a talk and look at the US base.

The “NSA spy protection league” Facebook page says of the day: “A group of people young and old gathered at the Griesheim market square and walked to the NSA spy complex, in the most fabulous weather. On the way there, surveillance methods were discussed … and possible behaviour of the NSA spies was the subject of consideration.”

It said some of the group had tried with various calls to tempt the NSA spies from the building, but none showed themselves. “Taking part in the walk was not enough, just to know that NSA spies are there – everyone agreed they wanted to see NSA spies with their own eyes. We will see what we can do.”