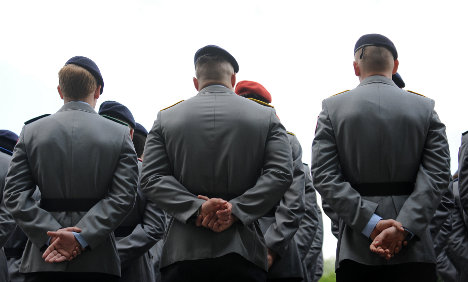 Three hundred far-right extremists and 50 Islamists were among those flagged up last year by the German Military Counterintelligence Service (MAD) – a special branch of the secret services dedicated to protecting the army.

Most of those labeled as extremists were men aged between 18 and 25, MAD president Ulrich Birkenheier told the Deutschlandradio broadcaster at the weekend. Army life often attracted extremists, said Birkenheier, because of access to weapons training and life under “particular structures.”

But extremist soldiers cannot always be removed from service – they can only be stripped of their uniform if a court finds they have been actively perpetrating extremist ideas. Whereas there was “no place” for extremism in the army, Birkenheier said, authorities often failed to collect enough evidence for a successful conviction and dismissal.

It’s unusual for the authority to publish such internal figures, which are usually kept under wraps by the German secret service branch, the Frankfurter Rundschau regional newspaper said on Monday.

MAD hopes that revelations of the extent of the problem may put pressure on politicians to give the authority permission to investigate potential recruits as well as army employees.

Currently, MAD is not allowed to track army applicants – only those already employed, and only then if the authority has had tip-offs from other soldiers or army staff about suspicious views or behaviour, said Birkenheier.

Green Party MP and security expert Omid Nouripour told the paper the army had a weighty responsibility to prevent extremists learning how to use weapons. “It is therefore good that there’s a growing sensibility for the fight against extremism in the German army,” he said.

But Nouripour said giving MAD more surveillance powers to keep tabs on recruits was not the answer to the problem. Instead, he argued the authority should be dissolved so that the civilian intelligence agencies could take over the work of tracking extremists heading for the army.

MAD was founded in 1956 to protect the then West German army and Defence Ministry. The authority has come under fire for its handling of the NSU neo-Nazi terror cell case, after burying the file it had opened on NSU ringleader Uwe Mundlos.