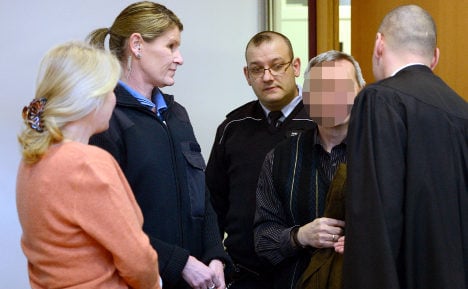 The couple in court. Photo: DPA

Russia’s Kommersant newspaper said that the Russian secret services wanted to bring the pair — known only by their code names Andreas and Heidrun Anschlag — back to Russia after decades as “sleepers” in Germany.

In a Cold War-style exchange, Moscow would simultaneously hand over to the West at least one spy convicted of passing secrets to Berlin or its allies, the paper said.

“The process of consultations [with Germany] on a possible exchange was started only recently, after their conviction” on July 2nd, a Russian security source told the paper.

“We will get our guys out of there,” the source added.

Another source told the paper that Moscow had waited until after the trial was over to seek the exchange, in case the legal process were toshed further light on how their cover had been blown.

Kremlin spokesman Dmitry Peskov denied to the paper that any exchange had been discussed at talks in June between President Vladimir Putin and Chancellor Angela Merkel.

The pair had been planted there West Germany from 1988 by the Soviet Union’s KGB secret service and later worked for its successor the SVR, the court heard.

Kommersant said that the jailed couple’s lawyer Horst-Dieter Petschke confirmed that the swap was expected and told the paper that the exchange could “happen at any moment”.

It said that possible candidates to be freed in Russia in such an exchange included Andrei Dumenkov, who was jailed in 2006 for 12 years for seeking to hand Germany data on Russian missile designs.

Another name citied was Valery Mikhailov, a former colonel in the Russian security service who was jailed in 2012 for 18 years for spying for the United States.

Such spy exchanges, familiar from the Cold War era and John le Carré novels, already have a precedent in post-Soviet Russian history.

The ten Russian spies — including the glamorous female agent Anna Chapman — were brought back to Moscow and subsequently personally welcomed by Putin.