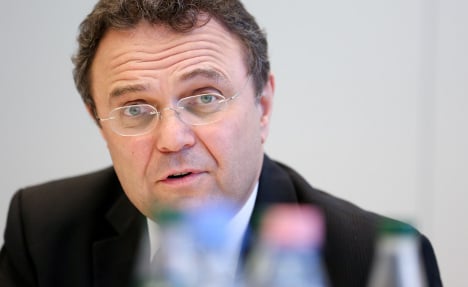 Friedrich was to see US Attorney General Eric Holder and President Barack Obama’s counterterrorism aide Lisa Monaco on Thursday and Friday to discuss reports of snooping on German citizens as part of mass international intelligence gathering.

“Among friends you have to expect straight talk,” Friedrich told the website of Der Spiegel magazine, which has published many of fugitive intelligence leaker Edward Snowden’s allegations about US spying programmes.

“For us, that includes saying that blanket surveillance of all communications content is in no way proportionate.”

The issue erupted during the campaign for September general elections in Germany, with the centre-left opposition accusing Chancellor Angela Merkel’s government of weakness and possible complicity in the programmes.

And she sharply rejected comparisons between the US National Security Agency and communist East Germany’s despised Stasi secret police.

Friedrich warned Thursday against demonising the US government.

“It makes me angry that people immediately and without complete knowledge can spread accusations against our American allies,” he said.

“It is not fair. Without tips from the United States and good cooperation between our secret services we would most likely not have been able to prevent terror attacks in Germany.”

Friedrich is to inform German deputies about his findings when he returns to Berlin Saturday ahead of the summer recess.

Citing information provided by Snowden, Der Spiegel has reported that US intelligence kept tabs on around half a billion telephone calls, emails and mobile phone messages a month in the EU’s top economy, after allegations that the US had also bugged European missions.

Anger over the spy row cast a shadow over the start last Monday of bilateral talks in Washington on what could be the world’s largest free-trade deal, between the EU and the US.