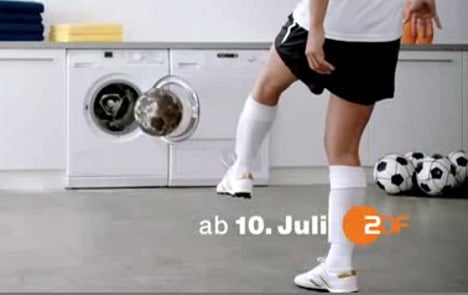 The short clip does not even show the footballer’s face as she trots down the stairs into a cellar in sparklingly white national kit holding a muddy football. As sounds of a football stadium are faintly heard in the background, she kicks the ball into the open door of a washing machine.

She then puts the wash cycle on “leather” setting and sits on top of the counter while she waits for the ball to be washed. A woman’s voice says “Ball magic in Sweden – the Uefa women’s football European Championship on ZDF”.

“Obviously the broadcaster urgently needs to be informed that this championship will be taking place on the field,” the Der Tagesspiegel newspaper wrote.

Twitter users are passing the clip around and slamming its message which one described as “Go on girls, go & win cup. But make sure you do the washing first.”

A spokeswoman for ZDF said, “The advert is supposed to promote the women’s football European Championship in Sweden in a tongue-in-cheek fashion.”

She added that women had been involved in making the advert.

“We hear the criticism, but do not think the advert is in any way sexist,” she said.