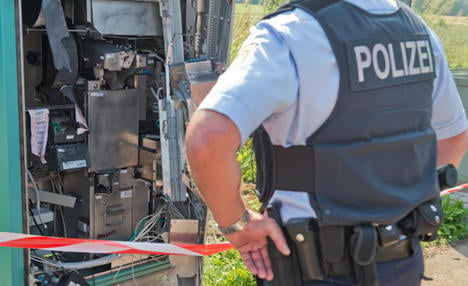 The method favoured by the ticket machine gangsters is to tape up all the machine’s openings, fill it with gas, and set it alight.

The latest attack was on the platform of Hesse train station Butzbach Kirch-Göns which was showered with large pieces of the machine on Wednesday. It was the 25th machine in the state to suffer damage this year due to the trend.

The same happened to another ticket machine in Frankfurt Eschersheim on Tuesday. Police said a total of 75 machines have been hit across the country. So far, there have been no injuries, but detectives warn that the culprits are risking their lives.

It seems, the Frankfurter Rundschau regional newspaper reported, that the culprits are after the money inside despite most machines containing at most several hundred euros. Yet each attack causes between €20,000 to €30,000 in damage.

“You need experience for something like this,” said spokesman Udo Bühler from the Hesse state office for criminal investigation on Wednesday. “If an amateur were to have a go he could really injure himself by using the wrong gas mix, or too much of it.”

Police were reluctant to speak of ticket machine serial attackers, Bühler told the Frankfurter Rundschau. He said they had been trying to track down suspects since the attacks began at the beginning of the year.

Hesse police issued a warning in May that culprits had been attempting to blow up the – predominantly Deutsche Bahn – machines. They have advised passengers to remain alert, and to immediately report ticket machines they find taped up – and get away from them.

Even if culprits have not set off an explosion, a ticket machine full of gas could easily explode from the electric system used to power the printing system.

Deutsche Bahn said recently it planned on installing CCTV cameras to track down, or deter, suspects.