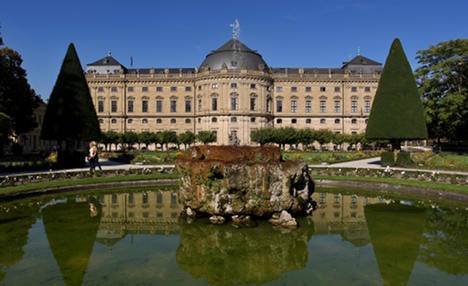 The Residence was home of the Würzburg prince bishops and built between 1720 and 1744 based on plans by Balthasar Neumann. It has been a UNESCO world cultural heritage site since 1981 and a must-see when visiting Bavaria.

The famous staircase with its unsupported vaulted ceiling features one of the largest ceiling frescos in the world, painted in 1752-53 by Giovanni Battista Tiepolo and an allegory of the four continents of the earth known at the time. The sequence of rooms is magnificent – from the vestibule to the Garden Hall and via the staircase and White Hall to the Imperial Hall, also featuring Tiepolo frescos. A particular highlight is the completely restored mirrored hall, which was reopened in 1987. The state rooms contain some Würzburg rococo masterpieces.

The court garden was designed at the end of the 18th century by the landscape gardener Johann Prokop Mayer, featuring sculptures by Johann Peter Wagner. Venetian paintings from the 17th and 18th centuries are on display in the state gallery. It has been a UNESCO-World Heritage site since 1982.