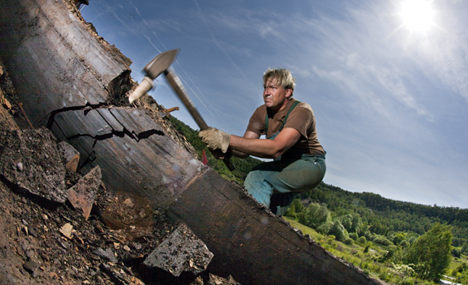 With more than 40,000 finds to date, the Messel pit fossil site in Hesse, central Germany, holds some of the richest deposits of mammalian fossils in the world – a remarkable snapshot of geological period which had dramatic consequences for the biosphere.

It documents life approximately 47 million years ago, and the miracle of evolution with around 109 plant families, eight fish, 31 reptile, five amphibian, more than 50 bird and more than 30 invertebrate species (insects in particular). Visitors can take guided tours led by qualified scientists who share their knowledge of a long-lost world and point out the beauty of the shapes and colours.

Exhibits of particular interest are the mammalian fossils; especially the remains of prehistoric horses. So far, more than 30 complete prehistoric horse skeletons have been recovered. The preserved contents of the stomach and soft tissues give clues about what the animals ate and how they behaved.

The site provides an amazing, bio-diverse insight into life during the Tertiary period; the fossils are evidence of the evolution of the living world, approximately 13 million years after the dinosaurs became extinct. It is fascinating to look back into the past and discover the predecessors of the plants and animals we know today, and many that no longer exist. It has been a UNESCO-World Heritage site since 1995.