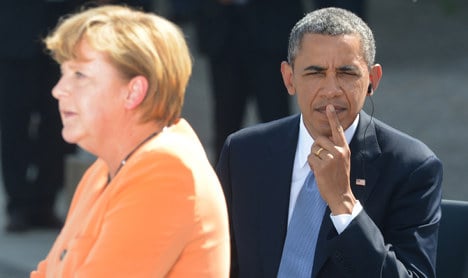 Germany and other European nations are in uproar over last month’s revelations by a US IT contractor that the National Security Agency has been scooping up vast amounts of data on Americans and foreigners.

“The president assured the chancellor that the United States takes seriously the concerns of our European allies and partners,” according to a readout of the call between the two leaders.

The White House said they agreed to a “high-level meeting” between US and German security officials in the coming days to address intelligence matters, and that a US-EU dialogue on intelligence collection and data protection would begin as early as July 8th.

That appeared to be a concession of sorts to European Union demands to set up working groups looking at the extent of the US snooping into phone data, emails and web searches.

Obama and Merkel, who faces criticism from the opposition less than three months from elections in Germany, also discussed the upcoming launch of sensitive US-European trade talks.

With some Europeans expressing outrage at how US data gathering could leave them exposed, French President Francois Hollande has threatened to block the negotiations until France can be sure spying on EU institutions has ended.

At an EU conference in Berlin on youth unemployment, the 28-nation bloc presented a joint reaction to the claims of US mass surveillance.

On a visit to Berlin this month, Obama reassured Merkel that American spies were not “rifling” through the emails of German and French citizens.

In Germany, a country whose history makes it deeply sensitive to personal surveillance, the issue is particularly troublesome.

At the centre of the revelations is fugitive US intelligence leaker Edward Snowden, who, with his US passport revoked, has been holed up in Moscow’s international airport.

Snowden has sought asylum in more than 20 countries, and suspicion surged this week that the 30-year-old was on the plane of Bolivian President Evo Morales, who had been in Moscow.

The flight was diverted and forced to land in Austria after several European nations closed their airspace to the plane, triggering an international diplomatic row.