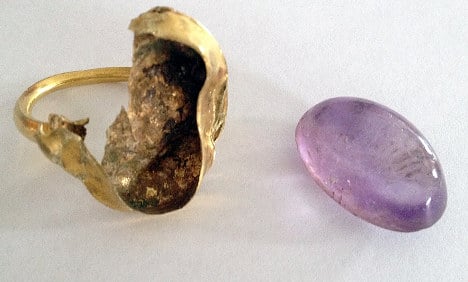 Police in Bremen have found a priceless piece of jewellery stolen this week from a locked glass display case in the city cathedral museum after the thief suffered a crisis of conscience and turned himself in. Yet the ring is completely broken.

“The damage is great, but I think it can be repaired,” said head of the cathedral museum Henrike Weyh after the ring’s recovery on Friday. The precious amethyst stone has been broken clear out of its gold casing.

The theft of the precious ring, described by police as being of “immeasurably high cultural value and inestimable material value” was discovered on Monday afternoon.

The forty-seven-year-old thief handed himself in on Friday, admitted he had stolen the ring and told investigators where they could find the priceless treasure – at a coin dealer’s shop in Bremen.

Museum authorities were unclear when or whether the ring could be restored and said they would now be re-checking security at the museum.

The ring is part of a sensational find uncovered beneath the floor of the cathedral in the 1970s, when archeologists dug a number of valuables from inside the graves of several medieval archbishops.

The experts found piles of gold and silver jewellery as well as well-preserved silk robes, all of which was put on display in the museum, alongside a collection dating mainly from the 14th to the 19th century