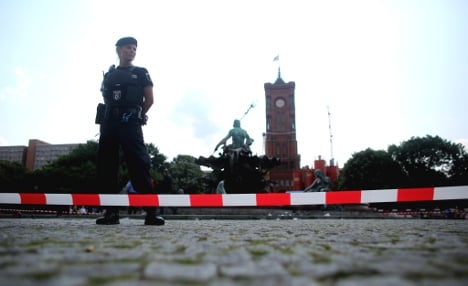 The incident occurred at 10am on Friday at Alexanderplatz in front of the capital’s iconic TV tower, when a man stripped and stepped into the Neptune fountain. He was brandishing a large knife and appeared agitated, cutting himself, wrote the Tagesspiegel newspaper late on Friday.

Police officers arrived, shouts were heard and as the crowd looked on, an officer shot the naked man in the chest – before long he was dead. In the aftermath of the very public incident, police have been forced to defend their actions.

According to their official report, a bystander had alerted authorities after seeing a man – a 31-year-old from Berlin – sitting naked in the fountain, bleeding heavily and cutting himself in the arms and throat with a 20cm long serrated knife.

As police tried to calm the man down, said the official report, one officer climbed into the fountain, whereupon the man approached him with the knife.

“Put the knife down!” shouted the policeman, but when the naked man failed to stop and was standing “right in front of the policeman in the water,” the officer shot him in the torso. He later died.

Given the numbers of bystanders, a number of photos and mobile phone footage of the incident quickly began circulating online and by Friday evening was appearing on TV news broadcasts.

Pending the results of an autopsy currently underway, public prosecutor spokesman Martin Steltner said it was highly likely that the man died from the gunshot wound, after the bullet punctured his lungs.

“It was an exceptional situation for everyone,” said Green MP Benedikt Lux speaking in a session of the Berlin senate on Friday.

However, Lux said he was concerned that the police had not tried non-lethal methods of preventing the man attacking or running away – why had they not shot him in the legs, or simply used pepper spray, he asked.