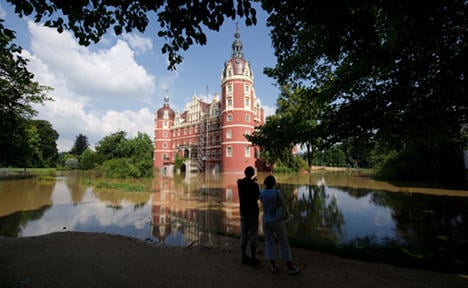 Prince Hermann von Pückler-Muskau, a nobleman, travel writer and primarily a landscape gardener of exceptional importance designed this garden, one of the most beautiful in the world.

Covering an area of around 830 hectares, Muskauer Park is made up of a number of smaller parks. These have different features depending on which side of the border they lie on. Pückler based the gardens around his stately castle on the English Regency style common in the early 19th century.

The parks’ charm lies in the harmonious design of the parkland area as a whole; whose individual, prominent sections are connected to each other and to the castle in the centre by broad vistas and winding paths. The use of local wood, primarily oak, lime, beech, poplar and sycamore and the fascinating integration of the natural course of the river Neisse, which flows through Lusatia, with the man-made canal (called “Hermann’s river Neisse” after Prince Pückler), which extend across the park like lakes.

Pückler’s Muskauer garden kingdom is a Polish-German world heritage site, an artistic model landscape that represents a new approach to landscape design in an urban environment and recognises the combined Polish and German effort to maintain, restore and research this work of art. It has been a UNESCO-World Heritage site since 2004.