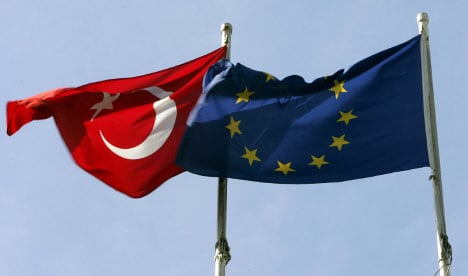 Because of Ankara’s massive crackdown on a wave of anti-government protests, Berlin last week blocked a plan to reopen Turkey-EU membership negotiations that were to take place in Brussels on Wednesday after a three-year break.

The row over the issue dominated talks between the bloc’s 27 foreign ministers in Luxembourg, where only Austria and the Netherlands rallied to the side of Germany, which finally said it would seek a compromise.

But German Foreign Minister Guido Westerwelle stressed that Berlin was trapped between a rock and a hard place.

“On the one hand we cannot act as if nothing had happened in the last days,” he said. “On the other hand we have to look for a strategy that satisfies the EU’s long-term interests.

Westerwelle said he had submitted a compromise proposal to Ireland, which currently holds the rotating EU presidency, “that reflects both aspects.”

bloc but set back the date to begin the talks in the autumn.

Last week’s sudden German stance triggered an immediate surge in tensions between Ankara and Berlin, with sharp words exchanged and each calling in the other’s ambassador for explanations.

At stake is an EU offer to Turkey to agree to open a new policy “chapter” – or set of rules and regulations – in Ankara’s eight-year negotiation process to win membership of the bloc.

Turkey began accession talks in 2005 but so far has agreed with the EU only one of 35 chapters needed to gain entry into the EU club.

Westerwelle said he had had talks with Turkish Foreign Minister Ahmet Davutoglu at the weekend and that he hoped to use the Luxembourg talks “to find a common position with our European partners.”

Reopening Turkey’s long-stalled bid for membership by discussing Chapter 22 on regional policy requires unanimity between the 27 member states, and as is often the case the ministers went into the meeting poles apart.

“Germany is working on a compromise concerning the opening of Chapter 22. Westerwelle is in close contact with numerous European partners and Turkey on the margins of the Council (of ministers),” a German government source said.

Asked whether the EU should change policy after the Turkish government’s harsh crackdown against protesters, Swedish Foreign Minister Carl Bildt said: “No. The European Union is a strategic entity that pursues strategic policies. We are not guided by the short-term things now and then.”

“Accession is one of the most successful, one of the most profoundly important policies of the EU that has brought peace and stability to the continent. It is not something subject to short-term whims,” he added.

Luxembourg’s Jean Asselborn said it was vital for the EU to maintain relations with Turkey while clearly criticising the crackdown on the protests.

“We need to think less about the government than about the Turkish people,” he said. “Millions of people in Turkey hope that the EU continues to put pressure” on the government and therefore talks should not be blocked.

EU foreign policy chief Catherine Ashton said on arrival at the talks that “engagement is a better option.”