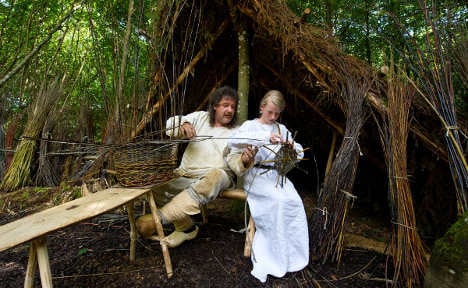 Bert Geuten, 63, has dreamed of building a ninth century monastic settlement – complete with a 2,000-seat cathedral – ever since he saw a model of one as a teenager.

Since that day in 1967, Geuten has been searching for a suitable spot for his construction – and has come up against his fair share of scorn and dismissal along the way.

But now, with the backing of the southern German town of Meßkirch in Baden-Württemberg, Geuten’s fantasy is coming true.

On Saturday he witnessed the placement of a large wooden cross in the spot where a church altar will stand, marking a symbolic start to building work expected to take at least four decades to complete.

Geuten said his craftsmen will begin by building a small, central church, just as the monks would have done. “In the ninth century the monks would have built a small church first – they didn’t want to wait until the cathedral was ready to be able to pray. So we’re doing the same,” he said.

Armed only with medieval tools, 25 skilled workers have now begun readying materials for the church on the eight-hectare site. Stone, clay and wood will be gathered on the spot from the ground and surrounding forest and the materials will be transported by ox carts.

Some of the craftsmen have had to retrain to learn the traditional medieval techniques which are no longer in use in order to work at the site, which has been dubbed Campus Galli.

“It’s just unusual to be working only with your hands again and not to constantly have the sound of the machines,” said craftsman 37-year-old Michael Straub as he used a medieval axe to chop trees trunks for the church.

Right now the site is just a clearing in the woods and a few provisional huts, but the plan is to open up to the public as soon as possible.

Meßkirch’s mayor Arne Zwick hopes Campus Galli will eventually prove as popular as a similar project in Guédelon, France, which every year receives 300,000 visitors eager to experience first-hand the authentic construction of a 13th century castle there.

With visitors in mind, nothing will be allowed to ruin medieval atmosphere. Tourists will be served only parsnip soup, sausages or other typical German ninth century fare. No cola, coffee or even chips will be on the menu – potatoes didn’t reach Europe until centuries later.

Just two modern concessions will be allowed: toilets with running water and 21st century hygiene standards for food preparation. “Otherwise the health authority will shut us down,” said Geurten.

With the full town and cathedral set to take between 40 and 50 years to build – and 63-year-old Geurten not getting any younger, he said he doesn’t mind that he probably won’t live to walk through the finished streets of his village.

“The construction is our aim, not the completion,” he said.