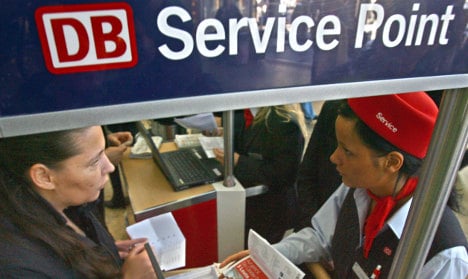 The current mish-mash of English and German used by the Deutsche Bahn has attracted the unfortunate term “Bahnglisch”, and not only causes confusion among the German majority of travellers, it often hinders rather than helps international understanding.

So out will go flyers, and in will come Handzetteln or Broschüren</i<, while Hotlines will in the future become Service-Nummern.

“We have given our staff a glossary on the topic of Anglicisms, so that with its help they can take a critical look at their everyday use of language, and hinder an inflationary use of English and pseudo-English phrases,” a Bahn manager told the Welt am Sonntag newspaper this weekend.

“We will avoid phrases such as “Highlights” for outstanding service features, and “Hotlines” will become service numbers as part of this process,” he said.

Transport Minister Peter Ramsauer has already made some headway within the ministry since he took over in 2009. His German language initiative has already identified 111 English-type words and phrases which are now frowned upon in the ministry and all the bodies for which it is responsible.

Former Deutsche Bahn chief Hartmut Mehdorn was responsible for the influx of English into the rail giant, the Welt am Sonntag said. He recruited managers from Lufthansa in his desire to launch the Bahn onto the stock market, and these managers brought what was described as a flood of Anglicisms with them. By 2007 Mehdorn was awarded the Language Adulterator of the Year award by the German Language Society.

The aim now is to re-introduce German into the system – and to ensure that the German which is used conforms to grammar rules.

For some things it is too late – so the ICE (Intercity Express) will not get a new name. “The wheel cannot be turned back here,” admitted Ramsauer.

And the BahnCard will remain, as will Call-a-Bike, although the latter will get a German explanation – Das Mietrad-Angebot.

But the Service Points have already been converted to DB Informationen and counters have reverted to Schaltern.

And ugly mixes of English and German should disappear – such as Rail&Fly – which might sound sophisticatedly international to German ears, but causes confusion and irritation to Anglo-Saxons.