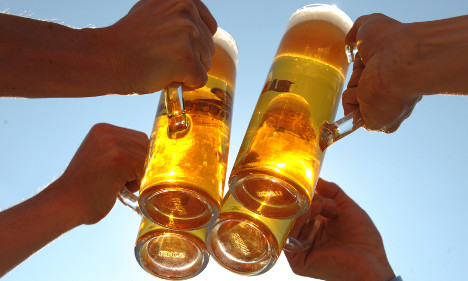 Drinkers in Germany pay less for a tipple than anyone in all but three other EU states, the Statistical Office of the European Communities (Eurostat) said on Friday.

Within the 27 EU member states, booze is only cheaper in Bulgaria, Romania and Hungary, said the Eurostat report, which compared price levels for food, beverages and tobacco in 37 European countries.

Prices for tobacco, food and drinks vary wildly across the continent, said Eurostat, and in some places things cost twice as much in other states.

Overall, prices of consumable goods in Germany lie just above the EU average, with cheaper alcohol being balanced out by the relatively high cost of meat.

Looking across the EU, a round at the bar or a night home with a six pack will cost the most for drinkers in Finland, where alcohol costs more than double what it does in Germany.

If non-EU members are included, the most expensive tipple can be found in Norway, with drinks costing almost three times the EU average. Drinkers also pay over the average odds in Ireland, Sweden and the UK, said Eurostat.

However, while a bottle of beer won’t cost the earth in Germany, non-alcoholic drinks and food can be more expensive than in other EU countries – most notably meat products, which are priced well over the EU average.

Overall, goods are most expensive in Denmark, where consumers pay 43 percent above the EU average for a comparable basket of groceries, closely followed by Sweden (24 percent higher) and Austria (20 percent higher).

A basket of groceries is cheapest in Eastern Europe, however, with prices lowest in Poland, Romania and Bulgaria.