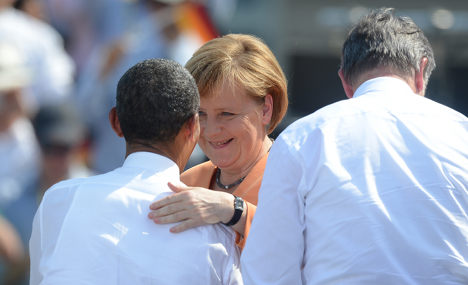 When voters head to the ballot boxes on September 22nd, Merkel could still miss out on a third term or, more likely, have to govern with a coalition partner who wouldn’t be her first or even second choice.

It is a threat that Merkel – who tops the Forbes Most Powerful Women list for the third year running – is all too aware of and handling with her signature style of cautious pragmatism.

“She is well placed, but the race is open,” said political scientist Lothar Probst of Bremen University. “She hasn’t won yet, and she knows it.”

Certainly Merkel, leader of the conservative Christian Democratic Union (CDU), is the favourite to stay at the helm of Europe’s biggest economy, in whichever power alliance.

“She is Germany’s most popular politician after Obama,” said pollster Klaus-Peter Schöppner, head of TNS Emnid, comparing her with US President Barack Obama who visited Berlin this week.

“In times when voters face highly complex issues which no one fully understands, from the eurozone to the global financial crisis, it is all the more important to have a leader you trust.”

Merkel may sometimes be caricatured abroad as a heartless austerity champion with a Hitler moustache, but polls show most Germans appreciate her no-nonsense leadership style.

At home, the trained physicist is regarded as competent and so honest that people think “she wouldn’t even take home the office stationary”, said Schöppner.

Probst agreed that, in a country with no shortage of bland, diligent politicians, “Mrs Merkel stands at the helm of this day-to-day pragmatism of somehow muddling through”.

“She is unpretentious, she lacks vanity, and people like that.”

‘She hasn’t won yet, and she knows it’

In the personal popularity stakes, a poll this week gave her a devastating 58-18 percent lead over rival Peer Steinbrück from the centre-left Social Democratic Party (SPD), which hopes to rule together with the Greens Party.

While the incumbent Merkel has recently visited flood disaster zones, attended a G8 summit and hosted the Obamas, underdog candidate Steinbrück broke down in tears on TV, touched by his wife’s supportive comments.

Steinbrück, Merkel’s former finance minister, has yet to recover from a bad campaign start, when he was savaged for accepting high speaking fees and again for complaining that chancellors don’t earn enough money.

The comments cut to the heart of an image problem Steinbrück, from the right wing of his party, has in selling the SPD’s campaign message of social justice and support for blue-collar Germany.

“The key in an election is that the campaign, the programme and the candidate must fit, but they don’t and that’s why the SPD has a problem mobilising voters,” said Probst.

He added that many traditional SPD voters “have not forgiven the party” for painful labour and welfare reforms of a decade ago that have revitalised the economy over which Merkel now presides.

The chancellor, meanwhile, has deftly snatched ideas from the SPD and Greens – from phasing out nuclear power to education and family policies – planting her flag in the political centre.

Polls suggest she has her finger on the pulse of the nation.

Her CDU and its Bavarian sister party the CSU together polled 40 percent, while their partners the pro-business Free Democratic Party (FDP) scored six per cent, in a Forsa Institute survey this week.

This would give their alliance 46 percent – just ahead of a tallied score of their main opponents.

The SPD drew 22 percent, the Greens 15 and the Left eight, although the last is seen unlikely to enter a coalition. The smaller Pirates and a new eurosceptic party polled just two percent each.

The opposition’s biggest hope now is that Merkel’s partners the FDP crash below five percent, the death zone where parties are excluded from parliament.

Merkel’s CDU could then offer to join forces with the SPD in a “grand coalition” or perhaps team up with the Greens, although there is a yawning gap between their policies.

Despite Merkel’s popularity, much can happen in three months, said Oskar Niedermayer of Berlin’s Free University, who also pointed to a large number of undecided voters.

“When you look at the polls so far, you see that a swing of two or three percent will decide whether the CDU-FDP coalition continues or the SPD-Greens take power, or whether both camps fall short, which would most likely lead to a grand coalition,” he said.

“So far this is impossible to say. Small changes can have very big consequences on the process of building coalitions.”